Well, after such a long wait we finally have something to watch in regards to the third season of the SCREAM TV Series… This has been a VERY LONG TIME coming for fans…  and im VERY sad to say after viewing this that im disappointed so far… See what  you think.. Clip below..

Well, here we go again, after 12 years im still here with this site, and whilst all may have been quiet lately on the site there have been things happening in the SCREAM & GhostFace world!
Earlier in the year we had news of a new GhostFace mask coming ( EL GhostFace – AKA Illumo GhostFace )  , on its arrival it had mixed reviews from fans and was smaller than i thought it would be, but i myself liked it..
A ‘first’ for the UK in 2018 also saw the Metallic’s return, which has not happened in a hell of a long time, and many UK fans had the chance to buy masks via this very website! , which was another ‘first’ as i had never bought a small stock of masks before for the purpose of helping fans out if they couldn’t get any… (Although in 2017 i did manage to find a few Devil Face masks and send a few to USA fans) ,  also making a return to 2018 stock was the Hard PU Plastic masks assortment, ( Devil Face, Skele Face, and the White GhostFace ) Ultra Whites were a plenty as usual, some in the USA seeing the amended Header Tag now say the older ‘ASIS’ text thus replacing the SCRE4M Branding from previous years… this was also present on the EL GhostFace header tags and also the 2018 Metallics… Another small fact with the Metallics was that the ‘Savers’ stores had cancelled their order for 2018 as apparently sales were down in years previous??!!?! Which i found hard to believe… Ultra whites UK Stock didn’t have the amended header tags with the older ‘ASIS’ this time around but i hope come October 2019 that we may see that change too..  On a sad note though NO GhostFace fans cam e across ANY EU Stamped 2018 masks!! I REALLY hope these have NOT stopped production now… 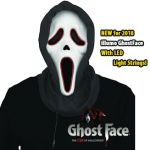 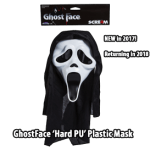 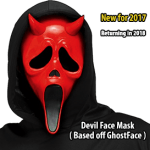 Yes, after the original GhostFace pin set did well, we also got a GhostFace carver’ pin, with all stock selling out Cavity Colors they then had another 2 versions of pins made, these were the STAB MOTION enamel pins, one version simply being the white mask, and another which was VERY limited, (ONLY 50 MADE) … which was a red mask, which also sold out in seconds!!! Eventually both types did sell out, but they had some more White mask types done, sadly there will be no more Red types!! 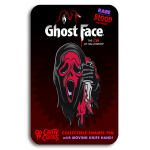 Well, this was all go wasn’t it!!!… it was cast, locations confirmed, casting calls also went out for extras, then it was filmed, and then wrapped!!! Twitter was alive with new info all the time from new cast members and then all of a sudden it went quiet, news broke of TWC troubles, and ever since we have had little info regarding what is happening, small rumours had popped up stating that names would be removed from the credits and then it went silent… many fans have asked RJ Torbert as to what is going on and RJ has little info for us too… we can only assume that talks may be going on in the background and hopefully one day us SCREAM and GhostFace fans may get the chance to see what the finished product came out like, remember, the REAL GhostFace mask returns this time, along with his PROPER voice Roger L Jackson!!

Whilst i didn’t attend this event ( i couldn’t afford it )  it definitely seemed everyone who did attend it had a hell of a good time, there were talks from extras in the movie in a big barn, rooms available to stay in actually IN STUS HOUSE, and also places to stay in other outbuildings on the property, there were goody bags which included a limited run of special Ultra White masks, and a locations tour around the fictional Woodsboro including the fountain, police station, shop where Sidney and Tatum talk, among others, another nice addition came in the form of a location video from ‘Adam the Woo’ or ‘TheDailyWoo‘ which gives us a very nice tour of Stu’s House, and even briefly driving there… Also, only recently, ‘January 4th’ via Facebook , Superfan Nate Ragon stated that some BIG NEWS was on the way regarding the SCREAM World, whether thats in regards to maybe going to Stu’s House again, or something totally different we dont know, we will be awaiting is announcement…  See Adams Video below.

Many Thanks to Anthony Masi who gave me permission to use the group photo below!! 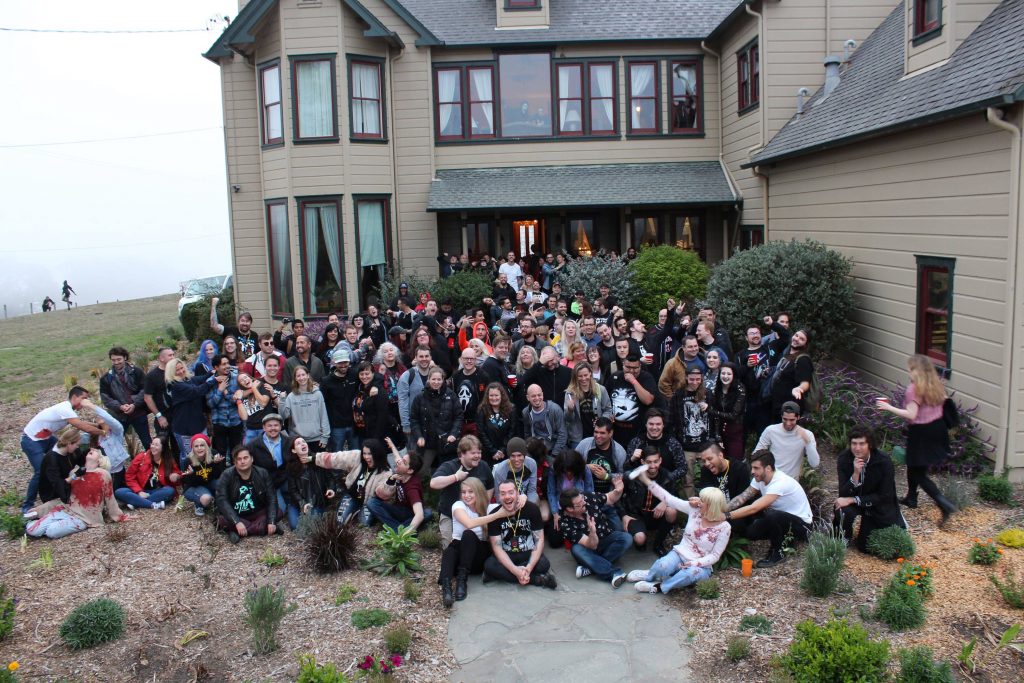 As usual Fun World will be in attendance at the Halloween and Party Expo Show in New Orleans, which runs from January 25th – 27th.. as usual it looks like Fun World has the largest booth again.. SEE HERE
A small rumour popped up via a facebook page for Fun World last year responding to a fan who had asked if coloured GhostFace were ever going to return, Fun World stated that ‘they would return next season, as in 2019’!!! So, Fluorescent’s may be returning to our lists of mask wants next year!! ( It is believed that the original colours of Pink, Green and Orange will be back, TBC )

Well, thats it for now, the only other small bit of info is that the very highly visited ‘Masks’ page here is undergoing a slow revamp yet again, many fans have sent images of many early masks and it is still undergoing alterations at this time, needless to say it will feature a lot more info on the earlier mask types as well as amendments to other sections like Metallics and HHN types to list a couple..

Well, for a few months now, (Around the Start of June) RJ Torbert has been teasing us fans about GhostFace ‘Living again’ and other phrases in relation to his return, and today we have now got some confirmation as to what is going on, as MTV have announced the latest… Via Bloody-Disgusting.com (in this article) … Production has just gotten underway in Atlanta…

Info below from Bloody-Disgusting.com – Click Banner above for FULL Article!

“Season three revolves around Deion Elliot, a local star running back whose tragic past comes back to haunt him at the worst time, threatening his hard-earned plans for his future — and the lives of his unlikely group of friends.”

“Scream’s” six-episode third season will air as a three-night event in March on MTV. A specific premiere date has not yet been announced. 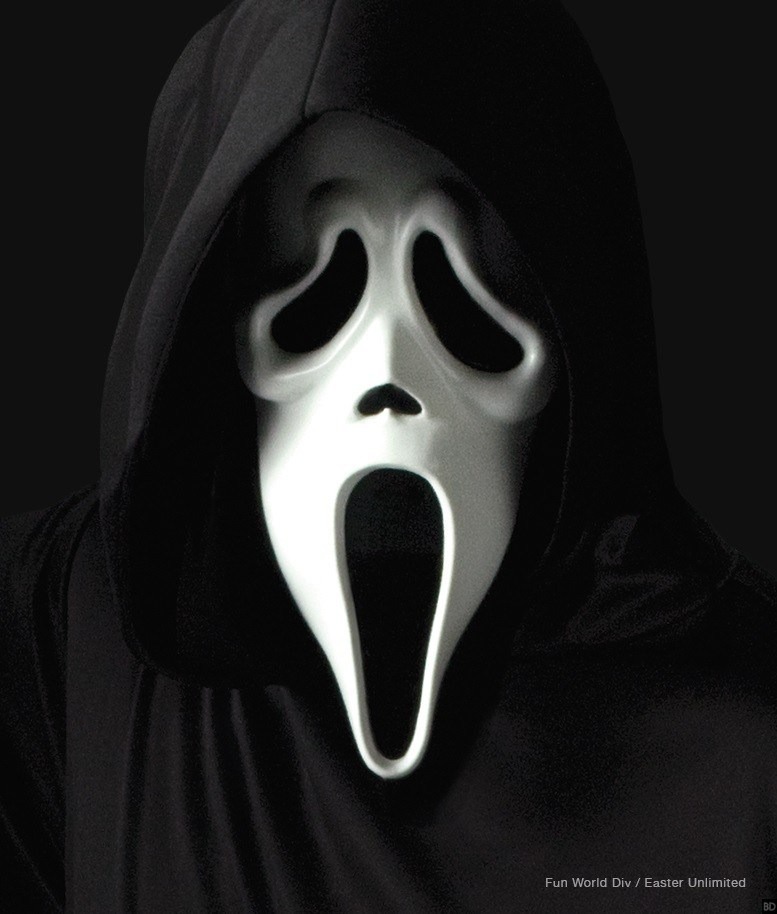 Well.. personally i myself haven’t seen anything much of the second season (apart from Clips in the season 2 playlist) , and i did hear from fans saying that they were getting bored during some earlier episodes of Season 2… but despite the ‘Floundering’ description i heard as the episodes went on, it seems that MTV and Dimension TV have decided to make another season.. Fans already have a Halloween Special coming very soon as it is, and i thought that it would probably finish itself off during its duration, but now you know different… Popular Website ‘Bloody-Disgusting.com’ posted up an article today.. Click banner above for the FULL read! (The Halloween Special Trailer is below)

From Bloody-Disgusting ( WARNING: If you haven’t had chance to see ANY of Season 2 yet then AVOID the article as it contains MAJOR SPOILERS!! )

In advance of the 2-hour “Scream” Halloween Special airing Tuesday, October 18 at 9:00 p.m. ET/PT, MTV and Dimension TV have renewed “Scream” for a third season with a nice and clean six-episode order, Bloody Disgusting learned.  There are no further details on showrunners, casting, location or production start date at this time.